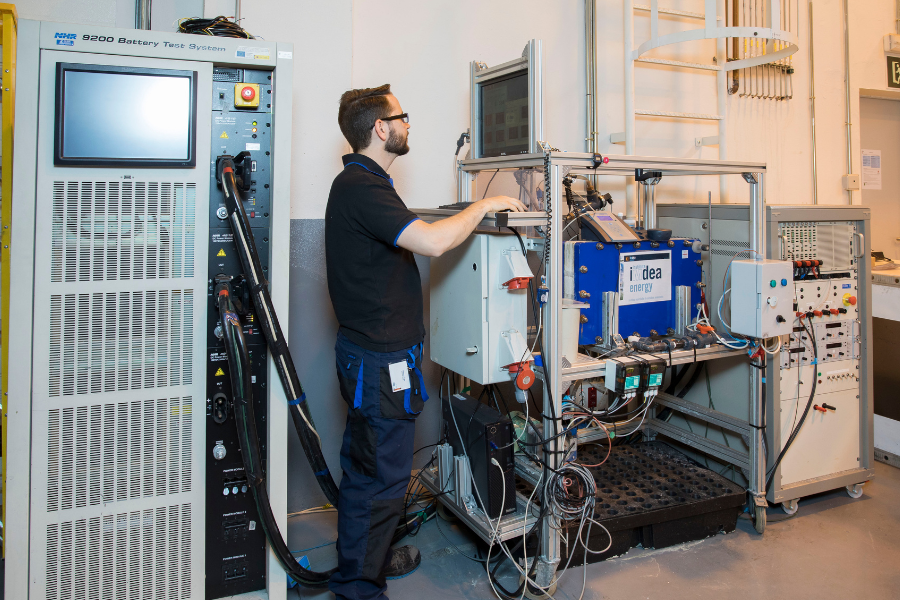 The water-energy nexus is one of the topics that has gained prominence in the last decade. Recently, the scope of this term has been extended beyond production to the storage level. This new way of understanding the relationship includes, for example, the search for synergies between the area of electrochemical energy storage devices (such as batteries and supercapacitors) and the field of water treatment, desalination or effluent decontamination.

The objective is to take advantage of the knowledge achieved in the field of energy storage to develop water treatment and ion or pollutant capture processes with higher energy efficiency. Thus, enhancing the manners of obtaining drinking water in a world scenario marked by drought and by the search for alternatives that contribute to face the climate challenge.

In this context, researchers at IMDEA Energy’s Electrochemical Processes Unit have taken a step further by taking advantage of the structural advantages of vanadium flow batteries (VRFB), which are characterized by their larger storage capacity, to improve the energy efficiency of the capacitive deionization technology (CDI).

CDI is a technology capable of reducing the ion content in solution while storing part of the energy consumed in the process. This is possible because this treatment operates in the same way as supercapacitors. Thus, in the CDI charging cycle, ions are captured producing a solution with lower ionic content and energy is stored, while in the discharge cycle the captured ions are released forming a brine and part of the energy is recovered.

The studies, recently published in the Journal of Environmental Chemical Engineering, show the transition from a 5 kWh VRFB to a 5-cell CDI stack equipped with 3D electrodes with one of the largest working areas reported to date, 1200 cm2. This transition allows taking advantage of critical aspects of the VRFB such as its design and assembly of the different elements, its electrical configuration using bipolar plates, or the use of optimized flow distributors to avoid energy losses.

The results show that the process of reconditioning the VRFB to be used as a CDI reactor is a success both in terms of performance, with a high desalination capacity, and in terms of energy consumption, allowing a recovery of 75% of the energy used in the desalination cycle, and robustness, as it manages to complete nearly 500 cycles, which is equivalent to almost one month of operation.

This opens up a new path within the framework of the circular economy to give a second life to the industrial vanadium flow batteries that have been introduced on the market in recent years.